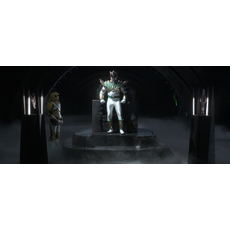 Los Angeles, CA: VFX Legion recently created a computer-generated universe for the Power Rangers: Shattered Grid trailer (https://youtu.be/X-v6WvuEwQ4) introducing the comic book series, and a new storyline with a dark twist. Legion’s team of artists built a virtual sci-fi environment that blends with original live-action footage and scenes from the Power Rangers TV series to create a promo that brings the comic book’s panel art into a live-action world. The release of the trailer launches the next chapter of the iconic Power Rangers’ story and marks the 25th anniversary of the franchise with the biggest event in its history.

Kyle Higgins, creator and writer of the new Mighty Morphin Power Rangers comic from Boom! Studios’ franchise, called on VFX Legion to create futuristic visual effects that transport the live-action into a fictional environment with an ominous sci-fi feel. At the same time, Higgins wanted to convey the dramatic evolution of the Power Rangers’ story, from its original light fantasy-feel tailored to young children, to a sinister scenario with a dramatically different look and tone.

The trailer features a malevolent Lord Drakkon, played by actor Jason David Frank, revising his role as ‘Tommy,’ one of the original Power Rangers dedicated to protecting the world. It opens with him viewing a CG hologram of a time when he was The Green Power Range. Now, the quintessence of evil, Drakkon’s mission is to destroy his former friends and companions.

Legion’s team bulked up Drakkon’s army of foot soldiers and henchmen, working from a couple of shots of soldiers saluting, flanked by spaceships that set out to attack Power Rangers in the other time dimensions.

“Once we had those assets we put them on a bluescreen, keyed out the blue and created individual cards, enabling us to reproduce the soldiers and built a massive army,” says VFX Legion’s CG supervisor, Rommel S. Calderon. “There were a limited number of source images, so we had to be creative with angles and shots.”

Kent Johnson, one of Legion’s on-set supervisors, gathered camera data at the shoot while overseeing the production to ensure that the bluescreen elements were correct. VFX coordinator Matt Noren took hundreds of photographs of the set, capturing every detail. A rough 3D model was then created from the photos using a photogrammetry program.

CG artist Alex Keller cleaned up the model, mirrored it and duplicated the image to achieve the illusion of a long, never-ending hallway that extended into the darkness. Calderon lit the 3D set to match the practical lighting of the live footage. Using Higgins’ concept as a reference, matte painter Marc Adamson hand-painted a futuristic cityscape and staging area for the thousands of soldiers.

Higgins spent over two-years weaving together elements of Power Rangers’ long-running storyline to create a cohesive and intriguing narrative for Shattered Grid that would engage die-heart fans, as well as a new generation of followers.

Legion’s team worked closely with the writer/creator on the concept, approach and style of the VFX that augment Lord Drakkon’s real-world environment. The effects draw upon the footage from the early seasons of the TV show, maintaining continuity and building upon the iconic Power Rangers legacy that Higgins is creating.

“I set out to create a trailer that would get the attention of Power Rangers fans and use social media to generate a buzz about the launch of the comic book,” says Higgins. "VFX Legion took the live-action promo to another level. The feedback on it has been overwhelming and built anticipation beyond anything we expected.”

VFX Legion (http://www.vfxlegion.com) is best known for its work on episodic television and feature films, and we’re always looking to branch out into other genres,” adds Hattin. “Creating a dark sci-fi universe inspired by an iconic comic book was a cool idea."
“It was exciting to combine my experience as a director with the world I built in comics, steering the story I created in print to the realm of live-action – something we can only hope to see more of in the future,” says Higgins.

The following item was added to your cart:

Checkout Continue Shopping
The following item was added to your saved items: